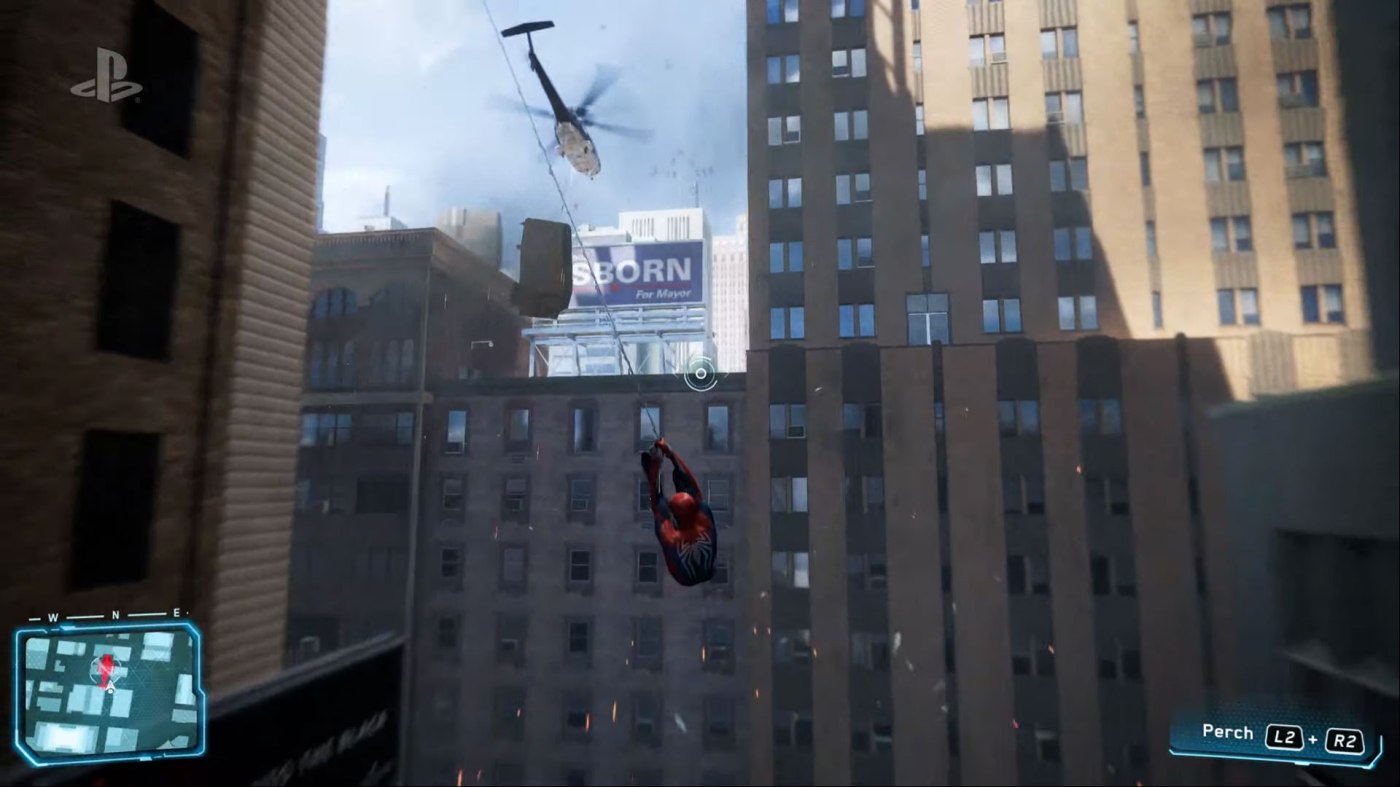 Microsoft may have had an exclusive look at Assassin’s Creed but PlayStation delivered a host of amazing looking exclusives with new looks at Uncharted, God of War, and Spiderman.

Wow, PlayStation brought some great trailers to E3 this year. We got a more detailed look at a few impressive exclusive games including God of War and Detroit: Becoming Human as well as a better idea of a few third party games like Destiny and Call of Duty: WWII.

There was a lot packed into PlayStation live, which ran pretty much wall to wall trailers, so they did not get a chance to explore much of it in depth. We saw gameplay from their new collaborative mobile-driven PlayStation link titles and many interesting new titles for the PSVR. PlayStation will be streaming all day Tuesday so we will get a better look at many of these games then. In the meantime, here are a few of the games that really made PlayStation Live stand out with what we have seen at E3 so far.

We got to see more gameplay from Bend Studio’s post-apocalyptic action adventure Day’s Gone. Previous gameplay showed off the game’s lighting effects and hordes of zombie-fied enemies. This time around Bend Studios showed off a few different aspects of their new game. We saw the stealth mechanics including the setting of traps. In a game where the enemy has overwhelming numbers stealth is going to be important. Deacon is able to sneak around the environment, scout, set distractions, traps, and even turn the hordes on human enemies.

In a game where the enemy has overwhelming numbers stealth is going to be important. Deacon is able to sneak around the environment, scout, set distractions, traps, and even turn the hordes on human enemies. Sound is also important as the game’s zombies are triggered by it, this creates a tense atmosphere as you sneak through the environment.

There are the obvious parallels to The Last of Us, which was curiously absent from the presentation, and although it looks great it is difficult to say if Bend Studios have done anything innovative with the genre.  There is no release date set for this PlayStation exclusive so there is probably more content on the way.

One of the best games to come out this year was PlayStation exclusive Horizon Zero Dawn. If you have finished the game, and then finished a few more times, exhausting the gameplay possibilities you may be relieved to know there is more content on the way in the form of campaign DLC. Players will still play as Aloy in a new adventure that her high into the snowy mountains in search of a legendary beast. The ominous narrator suggests that this is not a trip ordinary hunters so be sure to bring your best.

The Frozen Wilds DLC doesn’t have a price or launch date as of yet but it should be available later this year. If you need a refresher before then check out our tips for conquering Horizon or our Cauldron Guide.

We got to see new details about the story for Lost Legacy including the dynamics between Chloe and Nadine. This entirely new story will take place in India as the thief from Uncharted 2 and mercenary from Uncharted 4 team up in search of the legendary Tusk of Ganesh. Don’t expect to see Nathan Drake this outing but Naughty Dog has promised all-new environments that are larger than ever before and even a few changes to gameplay mechanics.

Although it may have begun as single-player DLC for Uncharted 4 it looks like The Lost Legacy has enough action and intrigue to fill a full Uncharted game. There are plenty of quips and a bit of tension as these two race ruthless warmonger, Asav to an ancient relic. All the classic Uncharted tropes are there, platforming, narrow escapes, and overcomplicated ancient puzzles to be solved to get there though.

You will be able to play one more Uncharted adventure August 22, 2017, on PlayStation exclusively.

The Destiny 2 trailer shown at PlayStation Live gives us more detail into the story and a few glimpses at what we can expect in gameplay. Formidable Dominus Ghaul, leader of the Red Legion has led a brutal attack on humanity’s Last City. The Guardians are powerless and scattered but now, in our darkest hour, new legends must rise to challenge.

We already know that none of your stockpile of equipment and weapons will be making the leap so this will be a fresh start for all players in a new and expanded universe. It looks we will be team up again for tough raids in order to reclaim our light. Destiny 2 will hit PS4 and Xbox One consoles September 6th and, for the first time, grace PC’s October 24th, 2017.

Call of Duty is heading back to its roots with a WWII era game and so far we have been impressed. PlayStation showed off Call of Duty’s driving element, it’s Multiplayer. Of course stepping back in time means no more exo-suits, boost jumps or futuristic weaponry but judging by this trailer that won’t be a problem.

Call of Duty online still looks as slick and action-packed as ever. Sledgehammer Games has made some changes to how players will rank up online by adding a new “Divisions” feature. This divides skill trees into five specialized areas each with its own weapon skills and advantages. We can expect the return of all our classic modes online as well as a new “War Mode” where players must work as a team and fight for control through multiple strategic objectives.

Call of Duty: WWII will be available on PC, PS4, and Xbox One November 3rd, 2017 although PlayStation owners who preorder will be able to play the Beta as early as August 25th.

We got our first look at God of War 4 last year at E3 with a short bit of gameplay and cinematics. This new chapter follows Kratos as his battles the gods of Norse Mythology but this time as the guardian of a young boy.

Kratos’s son is more than just a game-long escort mission, however, he plays a role in combat and character development for the former God of War. In the new extended trailer, we get a deeper look at the story, which will center around the relationship between Kratos and his son on their epic adventure.

We also had a chance to see more gameplay including new weapons and the return of brutal finishing moves. God of War 4 looks incredibly vibrant with lush environments and gore effects that really stand out on screen. You can experience the visceral gameplay for yourself “Early 2018” exclusively on PS4.

Another game we first saw last year, Detroit: Become Human was the penultimate trailer during PlayStation Live. The story-driven game allows players to make decisions that directly affect how the story play’s out. Scenes have multiple endings that depend on what your character did. While the original trailer was intense it did not provide a sense of the games greater story. In fact based on that footage alone, one could surmise Detroit would focus on a detective narrative.

With the newest footage, we get a better idea of the larger scope of Detroit. Its story revolves around a future where humans have created androids with AI so advanced they have become self-aware. This story appears to be heavily influenced by civil rights movements as the Androids seek to be free from their servitude. The story will evolve as the player makes decisions and we get a sense that there are many different paths for your multiple characters to take that will result in radically different resolutions.

Spider-Man looks incredible. It looks stunning and the gameplay appears to be fluid and fun. The gameplay is a little reminiscent of the Arkham franchise as Spider-Man can thin out the numbers with various web shooter tactics before engaging in hand to hand. He leaps effortlessly around using his web shooter offensively, rather than a belt load of gadgets.

Swinging around the city also looks like a lot of fun, although the segment we were shown features an abundance of quick time events. While they make for some impressive moments in the extended gameplay trailer hopefully the final game won’t rely too heavily on them alone.

One of our favorite things about the trailer was Parker’s inner dialogue and pithy quips during encounters. It made it a lot of fun. You can take control of Spidy in 2018 exclusively for the PS4.

What was your favorite part of PlayStation Live?

This article first appeared on DVSGaming.org